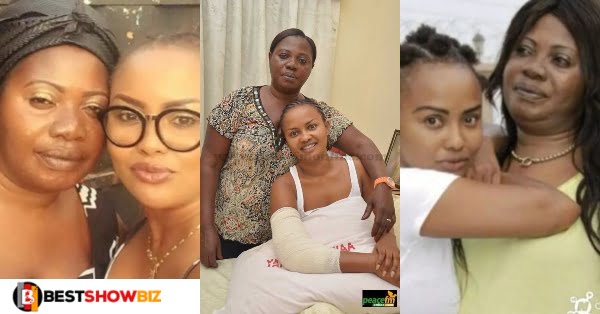 The mother of renowned actress Nana Ama Mcbrown has finally opened up on the changing of her daughter’s name from Felicity Ama Agyemang into the name which has become one of the household names in the showbiz industry.

For years, supporters of the actress and TV show host all around the world have referred to her as Nana Ama Mcbrown. Many believe that is her true name. She has used the same name since she began performing in Ghana’s Creative Arts Industry.

Perhaps you assumed it was her maiden name or a family name.

The award-winning actress changed her name from Felicity Ama Agyemang to Nana Ama Mcbrown for reasons unknown to her — most likely showbiz-related.

However, the cat has been let out of the bag as Mcbrown’s mother, Cecelia Agyenim Boateng, has opened up about why her daughter changed her name from Felicity to Nana Ama Mcbrown for the first time.

Mama Cece stated in an interview with Okay FM that ‘Mcbrown’ was added to Nana Ama’s name because her uncle wanted to fly her abroad but wanted it to appear as though she was his adopted daughter.

WATCH THE VIDEO BELOW;