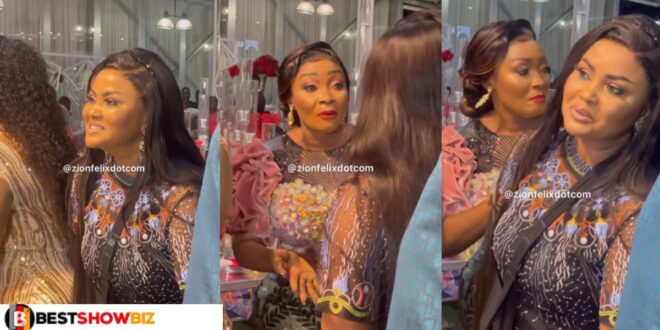 Nana Ama McBrown, Emelia Brobbey, Prophet Nigel Gaisie, Prophet Salifu Amoako, and others were among those who attended the event, which was hosted in a private venue in East Legon.

The program’s goal was to generate money for Empress Gifty Osei, who is about to release her single “Eye Woaa.”

Friends and loved ones who attended the program, without a doubt, expressed their affection for her and generously donated to help her achieve her objective.

Gifty Osei, a gospel musician, performed a song ministry in which she sang praises to the Lord and soaked the hearts of the audience.

Fans sprayed Empress Gifty Osei with money while she was ministering, including her husband, who tossed a couple GHC 50 notes.

Actress Nana Ama McBrown and two friends who had just arrived at the event were called to make offers during the fundraising.

She admitted that she was only there to escort her well-heeled friends, not to spend money.

According to her, she was called to accompany them, which she did without intending to donate.

Slay Mama Love’s public declaration that she is broke amused the audience.