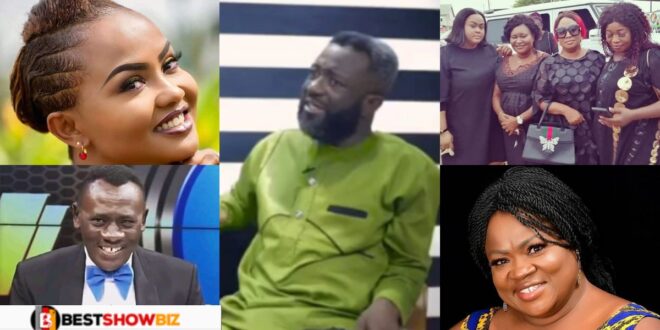 “Nana Ama Mcbrown is the one who made Mercy Aseidu, Akrobeto and others famous”- Miracle films (video)

Mr Samuel Nyamekye, the popular movie producer/director of Miracle Films, has disclosed that Nana Ama Mcbrown, an actress, presenter, and brand ambassador, is the biggest star in Kumawoord in the eyes of Miracle Films.

According to him, before any of the performers became well-known, they were had to appear in films with Nana Ama McBrown as the lead. In other words, Mcbrown helped to make all of the main names in Kumawood extremely well-known.

In an interview with Poleeno, Mr Nyamekye stated that Empress Nana Ama McBrown, who he considers to be the finest, was responsible for the success of stars like Akrobeto, Mercy Asiedu, and Lilwin, among others.

Read Also  "I am happy TB Joshua is dead, it is left with Owusu Bempah and Duncan Williams"- Oheneba David (video)

When asked about Nana Ama Mcbrown’s real name Felicity Ama Agyemang in the interview, Samuel Nyamekye stated that she is Miracle Film’s all-time superstar, but when it comes to Kumawood as a whole, Agya Koo continues to retain the unbroken record.