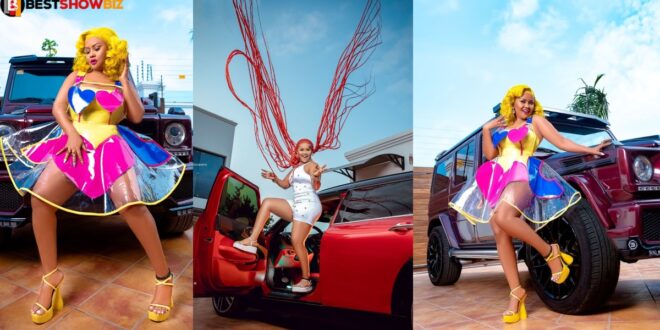 A social media user has slammed actress Nana Ama McBrown for sharing birthday images that they believe are too intimate.

Due to peer pressure, a formerly pure star like McBrown has now become a slay queen, according to the fan.

McBrown posted a set of images to commemorate the occasion, and that’s when the hilarity with this fan began.

McBrown was photographed wearing a provocative latex tiny dress with a love design that exposed her thighs and bust.

She also flaunted her wealth by posing in front of two (2) of her vehicles, one of which being the renowned Brabus G Wagon.

Take a look at the images below…

“This old woman paa de3. Happy birthday anyway. But please consider your age. [email protected] Married woman paaa! People don’t want the truth to be told because of fans. So are you happy with this dressing as a married woman? Call a spade a spade!” he fired.