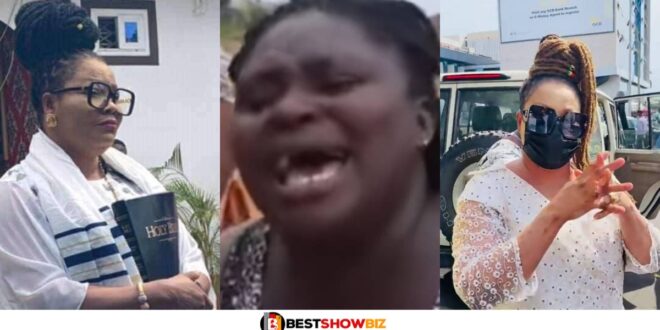 “I still love Nana Agradaa despite frauding me”- Victim reveals

In spite of everything that has happened to a victim of Nana Agradaa’s money-doubling scam, she (the victim) has declared that she still has so much respect for the evangelist that she can’t speak badly of her.

The young woman from Sunyani who claimed to have brought GHC1,000.00 with her said she had paid an offering and donated the remaining funds out of her admiration for Evangelist Patricia Asiedu, a.k.a. Agradaa.

The self acclaimed woman of God had earlier promised her congregation to share GH₵300,000.00 to anyone who would pay an offering that day, saying they would receive twice of whatever the brought to church.

however, after making a payment to get it doubled for them, they realized it was all a hoax.

“I saw the add on TV and I came with GH₵1,000 because I needed money to trade. I came from Sunyani. I gave her everything without leaving even lorry fare because she said she was going to give us money. She took everything even the coins. Someone even had to give me money”.

The young lady whose name has been canceled continued; “Nana Agradaa is someone I really admire that’s why I came. I won’t say anything bad about her because of what has happened. At least I used it as offertory”.

According to this lady, after the people ha realized they were not going to get what was promised after donating their monies, they rather asked the fetish priestess-turn-preacher to sort them out with transportation to their various destinations – which was also futile.

“So we asked her to give us lorry fare and even that she didn’t want to. So we pleaded with someone who went to apologize on our behalf and she made us queue. She asked us where we were each going. If you tell her your transportation is GHc 40, then she gives you GHc10. If you refuse, you have to sleep over”,

Meanwhile, Police were tipped off about the scam and has detained Nana Agradaa. She is currently being investigated.