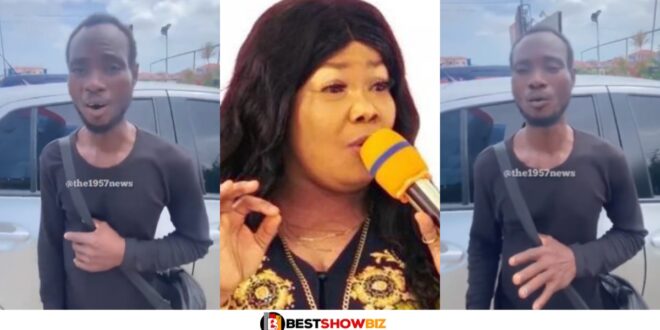 The internet has been rife with reports that Reverend Patricia Asiedua, also known as Nana Agradaa, the self-proclaimed lady of God, is engaging in a scam against her church members.

According to the reports, Agradaa promised her congregation to share GH₵300,000.00 to anyone who would pay an offering that day, saying they would receive twice of whatever the brought to church.

However, after the congregation had made payments, to get it doubled for them, they realized it was all a hoax.

A recent video has surfaced on Twitter, featuring an interview with one of the victims in which he explains how the whole incident unfolded. According to him, Nana Agradaa made it clear to them that, the amount one offers as offering will determine the amount she is going to give the individual. he said most of them threw all their money into an offering bowl without giving any thought to how they would get home.

This guy must be invited to aid in the investigation since he knows more and is a victim. pic.twitter.com/zVIVc8FZ1Q

The Ghana Police Service has issued a statement announcing that it is prepared to launch an inquiry into the aforementioned matter, and it has requested that any and all individuals who may be able to assist with the investigation present themselves to the Police Headquarters in Accra.

Read Also  Time to weep and time smile: New photos of Rawlings son looking so happy at a wedding pops up

According to additional accounts, the fetish priestess-turned-preacher is currently in police custody due to the scam.