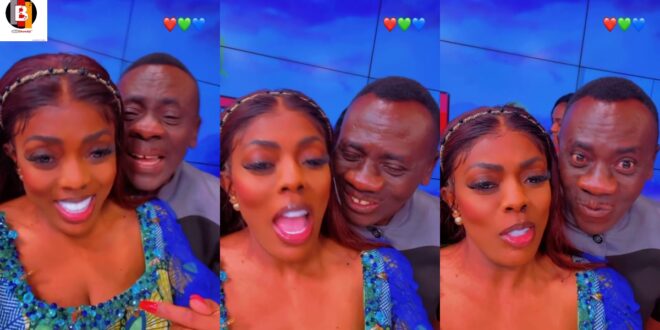 Before the performance began, the two legends had some fun on camera, with Akrobeto introducing the lady as a nephew rather than a niece.

The footage, which was later published by Nana Aba on her Instagram account, has now gone viral.

Before the performance began, the two media superstars had a good time filming themselves on their phones.

Akrobeto, who struggles to explain himself in English, chose to lavish praise on the ace presenter in the video, expressing how much he respected her.

During the video, the UTV presenter mistakenly called Nana Aba his nephew instead of niece. After it was shared on social media, this part of the video caused many people to have their ribs broken.

Ghanaians have been expressing themselves in a variety of ways.

Nana you guys did well today. Please you must have a program on UTV where you will translate English two Twi, we were having fun but you guys truly thought us something. Please don’t forget to mark my Grammar

There’s niece and there’s knees. We all know the one he’s referring to.