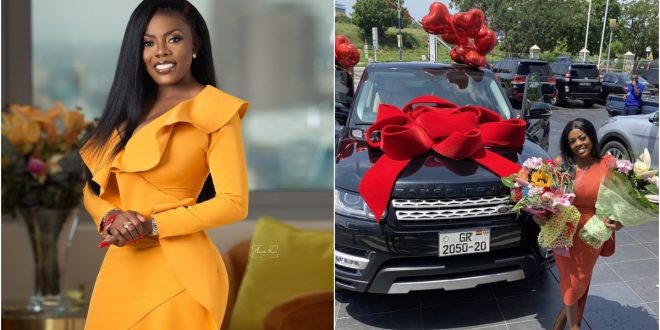 A new video that has fast gone viral indicates that broadcast journalist Nana Aba Anamoah has removed the fake number plate on her Range Rover.

as we reported earlier a good samaritan surprised Nana Aba Anamoah with a brand new Range Rover on her birthday.

well, it appeared that the number plate on the Range Rover has already been registered for a Nissan Rogue at the DVLA.

following that the DVLA made a press statement which states that “GR 2050-20” is registered to a Nissan Rogue and not Range Rover which means Nana Aba and who ever gifted her the car has breached the law.

according to the DVLA, using the number plate of a registered car on another car can result you in jail.

with that Nana Aba has immediately removed the fake number plate from her Range Rover in the video below.

as to who gifted her the car, Nana Aba has failed to disclosed but then watch her video below;