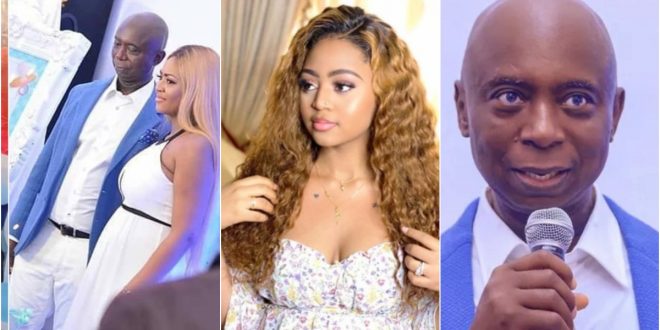 Na so him face be: fans tell regina daniels after she told ned he frowns too much

A video of the Nollywood actress and new mother in town, Regina Daniels’ has surfaced which captured her asking her husband Ned Nwoko to smile as she claimed he frowns too much.

This video has got many social media users reacting. Many are those who are mocking her on this issue as some claimed that is how her husband’s face is and not that he has frowned.

According to others, Ned is thinking about how to get another virgin to marry, the reason putting a smile on his face isn’t working.

taking to the comment session, one social media user with the name justfabrics01 wrote:‘😂🤣… Regina na so him face be… even surgery no fit make am fine 🙄‘. its_katchy also wrote: ‘So even Snapchat filter no fit save this man🤔With him jaw like tortoise own’.

another user identified as lee_flawless wrote: ‘Person wey Dey reason how he won marry another virgin, gats frown nau cause e no easy to find’. check out more in the comment session of the post above.
Share