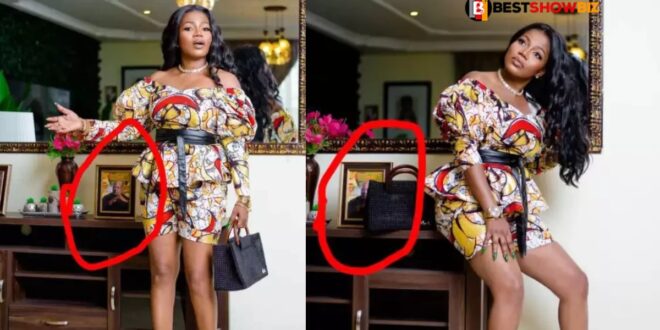 Mzbel mistakenly uploads photos of “Papa no” on social media

Mzbel, the renowned Ghanaian highlife singer, has left many people scratching their heads after posting images of the Papa No on social media by accident.

It may be recalled that Mzbel and Tracey Boakye recently dominated social media and had their names mentioned in media outlets following a feud over an unnamed sugar daddy dubbed Papa No. 1 by Ghanaians.

However, upon more investigation, it was discovered that former President John Dramani Mahama was the driving force behind their never-ending feud; simply put, Mahama is the supposed Papa No.

Several times, they both claimed that the purported sugar daddy is not the National Democratic Congress’s flag bearer (NDC).

After all of the back and forth in the drama, a new development has emerged, and this time it is a chilly wind blowing over Mzbel’s camp.

A framed portrait of Mahama was spotted in the backdrop of a recent photo published by the entrepreneur on her web portals.

Despite the fact that it has nothing to do with the musician’s photographs, Ghanaians have deduced that Papa No is none other than John Mahama.

So, have a look at the images below and form your own judgments.