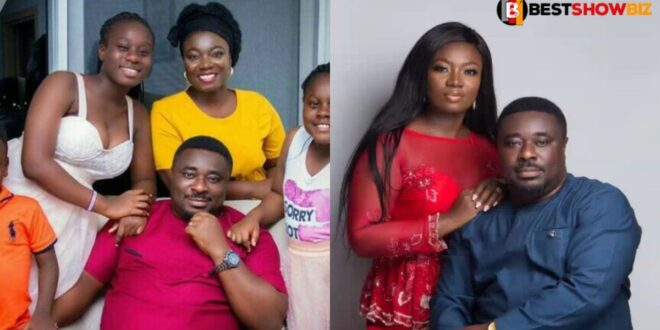 Okyeame Quophi, the husband of popular television personality Stacy Amoateng, has revealed why his wife disappeared from the public eye for nearly two years.

Quophi Okyeame revealed in an interview with Kofi TV how his family was forced to stay at the Edumfa Prayer Camp for a year as a result of a family emergency.

“We had a visitor in the house, and the complaint was that she was locked behind her house,” he said. We are folks who care about other people. We welcome anybody and everyone into our house… As a result, she welcomed her into the house by opening the doors. The lady explained that she needed to shower since she had a meeting to attend that evening.

She came to our place and took a shower, then changed into her outfits. She wore one and also took another with her on the trip. She is a close friend of Stacy’s. And even brought an extra pair of pants, a brand new pair. We didn’t give it much thought at all.

So she subsequently returned one of the clothes, and the rest, as they say, is history. This occurred in the year 2012. “After a couple of months, the whole thing (sickness) started,” Quophi Okyeame explained in an interview about her experience.

He went on to say that they spent about a year in a prayer camp in Edumfa before his wife was cured of her illness.

As a result of their encounter, Quophi has come to the conclusion that evil and “juju” exist in this world, which he shared with the group.

Watch the complete interview in the video below.