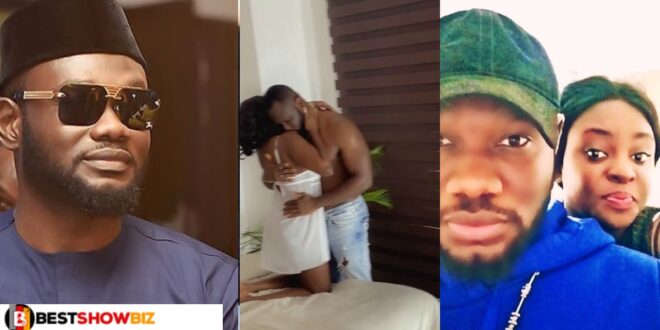 “My wife was the person who broke my v!rginity”- Prince David Osei

Prince David Osei, an award-winning Ghanaian actor and film producer, has stated that he kept his virginity until he met his current wife.

Prince David Osei made these claims in an interview with Happy FM’s Doctor Cann, which many Ghanaians have labeled as a blatant lie.

He went on to say that chasing girls and sleeping all over the place were not his interests when he was younger.

Prince David Osei also stated that he had his first sex in 2008, after meeting his wife (Louisa Nana Ama Asieduaa Korankye), with whom he now has three children.

“I broke my virginity in 2008 after I completed the University of Ghana so all the time I was in school, I was still a virgin. The funny thing is that I used to walk with a lot of pretty ladies on campus but I didn’t do anything with any of them. Most of the boys didn’t like me because it looked like I was taking all the girls”,

In the middle of the interview, he also recalled an incident where he had to fight with a guy over his current wife.

“I blasted the guy and told him never to call my girlfriend again meanwhile she wasn’t even my girl at that time”.