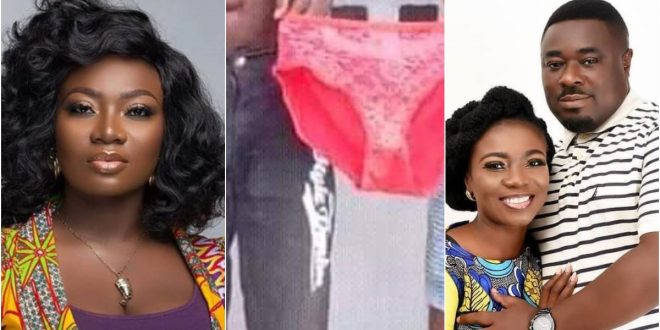 Stacy Amoateng who is widely known on TV3’s entertainment show, Music Music has been off the screens for a time now.

her absence generated rumors that she has traveled abroad, she is dead, she is pregnant and others.

but her husband, Okyeame Kofi has revealed what Stacy went through that took her out of the screens.

according to her husband speaking in an interview on Kofi TV with Kofi Adoma, Stacy has been seriously sick for some time now but she is fine now.

according to Okyeame Kofi, Stacy felt sick but went through diagnosis, medications, and even surgery but what was happening to her couldn’t be seen.

after several tests and surgeries, doctors couldn’t find what was happening to Stacy in the stomach.

they then had a revelation from Prophetess, Cecilia Marfo who told them to go to a prayer camp in the Central Region, Adumfa.

at the prayer camp, they got to know that a female friend who came to perch with them actually took away his wife’s clothing and red panties just to ‘Juju’ to destroy her.

Okyeame Kofi disclosed that they stayed at the prayer camp for one good year and by God’s grace she was heal and that was the beginning of his encounter with God.

Read Also  Papa No Saga: Mzbel arrested by Ghana Police for this reason - find out