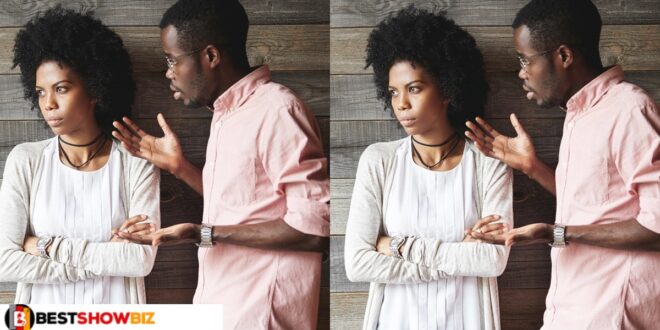 A Ghanaian man told David Papa Bondze-Mbir of Facebook that his wife poisoned him after she caught him cheating on her.

The anonymous married man, who has been married to his wife for 9 years, added that an encounter with a police officer saved him that night.

He revealed that his wife drove him around Accra for over 45 minutes while he was in pain.

“She drove me for over 45 minutes through the streets of Accra, while I was lying in the back of the car in pain.” She passed two clinics, one hospital, and three pharmacies.

My only luck came when we approached a police checkpoint and I had to forcefully raise my head to yell for attention. When the cops told my wife to stop, she burst into tears.

She informed the police of my situation and informed him that she was transporting me to Korle-Bu. I mustered enough courage to request that the officer accompany us to the nearest hospital instead, which he did.”

Despite the fact that the incident occurred two months ago, he has since become extremely wary of his wife.

Below is his full message to Papa Bondze-Mbir:

“I married a good woman: decent, elegant, kind, graceful, beautiful and intelligent. I chose her, and not the others because she was my friend…

And I wanted to marry my friend: We’ve been married for Nine (9) years. We have Two (2) beautiful kids, a boy and a girl. I naturally love slim women, and my wife was slim and appropriate when we married. However, after the kids, she started putting on weight, little by little.

I had no real problems with that because I loved her, and her new weight wasn’t so weighty either. I think I began to flow with her new body, and I did enjoy her.

She made efforts to try losing a few pounds, because according to her, she had caught me a few times – while in my car, checking other ladies out. It was a joke we both initially would laugh to. I started developing feelings for this other lady who had been my friend for years.

I never imagined it happening to me. I had tried everything by the book to focus on only my wife, but I was falling in love with this other lady. My wife accidentally had access to my phone, while unlocked, and she read a few of the messages exchanged between us.

She confronted me and I confessed to the truth. She was pissed initially, but with time, she came along to help me through it. I know, for a fact, that unseemly habits, although they may seem innocuous, can easily become hard, or even impossible, to break.

I needed to check on her – as a friend. One thing led to the other, and we ended up having sex at her house. From the bedroom window of this lady’s house, I thought I saw my wife’s car parked in the neighborhood. I got scared, really, so I dressed up quickly to go out and check.

The car was gone when I reached the main gate of the house. I called my wife’s office line and she answered the phone: she was at work, and I thought that was strange – because it definitely was her car I saw parked outside from a distance.

She was all chatty and friendly and normal with me throughout the day, on phone, till the end of day. I ate the rice and chicken stew she had served me. The only other outside meal I had eaten that day was the pizza I bought for my friend when I visited her at her house.

That dawn, I thought I had diarrhoea. But I started vomiting, and foaming in the mouth. The pain in my stomach was unbearable. I fell on the floor and started screaming for help.

My wife was lying on the bed, pretending could not hear me. My kids heard the cries and rushed to our bedroom, crying and waking their mother up.

I begged my wife to take me to the hospital, and that was when I figured she might have attempted to hurt me on purpose. She drove me on the streets of Accra, for over 45 minutes, while I was lying at the back of the car, in pain. She drove past two Clinics, one hospital, and three pharmacy shops.

My only luck was when we approached a police check-point that I had to forcefully, pop my head up to scream for attention.

My wife started crying when the police signaled for her to stop. She informed the police about my situation and made him aware she was taking me to Korle-Bu. I gathered enough strength to also beg the officer to escort us to the nearest hospital instead, which he did.

The doctor confirmed it was food poisoning. I since got in touch with the other lady to be bringing me food at the hospital.

I am feeling better now, and was sent home two months ago. My wife is acting all innocent and sweet, but I know better. I eat out nowadays before returning home. Every trust and respect, and love I thought I had for my wife is gone.

I still love her, but I can’t look past this.”