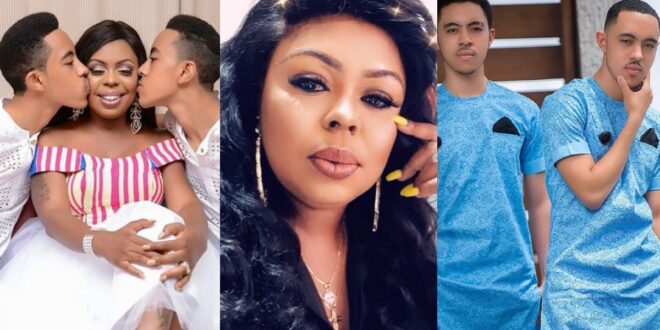 Afia Schwarzenegger, a Ghanaian comedian, has spoken out about her twins and their bond.

Afia Schwar has said that her twin sons James and John are womanizers and that she has always sack women who have followed them.

Afia Schwarzenegger disclosed in an interview with Zion Felix that she knows her boys are young and may have a boyish mentality about following ladies and getting into mischief, but she will do whatever she can to tame and raise them to be what she wants.

Afia Schwarzenegger went on to say that she had questioned her son, James, and his girlfriend after they posted their first photo on social media, but that they had done it again.

She claims she had no choice but to strike the young girl hard with such a stern message to leave her son alone after they hit social media for the second time with their bedroom snap.