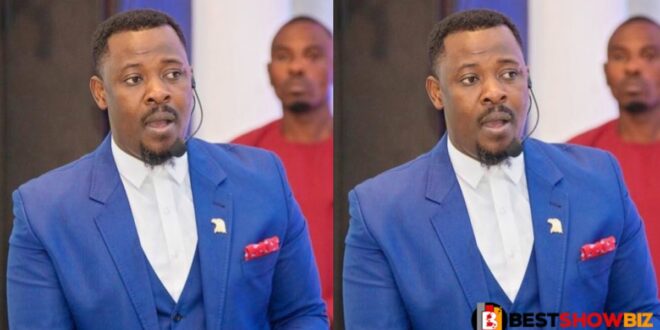 My time is near, I will die very soon – Nigel Gaisie

As a consequence of a revelation from God, popular Ghanaian Prophet Nigel Gaisie believes that he knows when he will die.

“I know when I am going to die, which is why I cry during worship; God gives us to you [congregation] as a gift, but you kill us before we are ready,” he grumbled.

He made the remark in response to the death of TB Joshua, a well-known Nigerian televangelist and founder of the Synagogue Church of All Nations.

According to him, African men of God die young as a result of African persecution.

He highlighted televangelists Billy Graham and Reinhard Bonnke, among others, who, according to him, died in their old age, but African preachers such as Bishop Benson Idahosa, who died at the age of 57 due to his disgrace.

He also blamed Nigerians for TB Joshua’s death, claiming that they referred to him as a “fake Prophet.”

Prophet Nigel was overheard saying something that clearly did not make him happy.

He also wanted to know whether he had any faithful “soldiers” among his congregation who would stick with him in times of adversity and persecution.

The divisive Prophet urged his followers and Africans to treasure their men of God, declaring that they [African preachers] are gifts from God.

here is his words;

”…… if not for the advice some of you give, I would have left Ghana. We come as a gift to our generation and you use your evil mouth to stop us. That is why I cry in the church. I know why I’m crying because I know when God will take me away and it will not be long. I will go; I’m telling you. No, I know when God has told me. That is why, when I am prophesying, I’m under worship; I cry because God has told me. He said he will take me away very soon because of how you, people, are handling us”.

”Who will pray for me when I need prayers? Who will speak pleasant things to me . . . you know you don’t know the bullets . . . we don’t sleep,” he exclaimed.