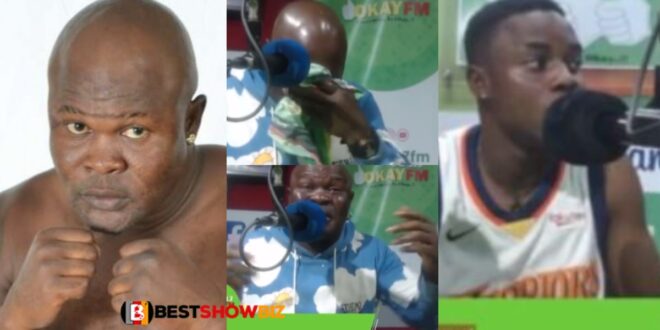 Popular Ghanaian boxer Bukom Banku finally explained why he fought his own son on the streets of Accra.

Speaking in an interview together with his son in the studios, Bukom admitted to having an ex-girlfriend and advised his kid to keep away from her, but his warnings went unheeded.

He even beat him up to get him to break up with the girl, and his son had to contact the cops to have him arrested. He claimed that he despises his son and that seeing him causes him a great deal of grief.

He stated that he still looks after him, but that he despises him. His son agreed that what he stated was true, but he was unable to explain why he had done so to his father.

Read Also  My boyfriend is addicted to sports betting, I'm afraid of our future - Lady cries out

Bukom Banku fell into uncontrolled sobs as soon as his son revealed that he had broken up with the aforementioned ex-girlfriend.

The fighter stated that he was broke and that they had to ask for money to survive. He also claimed to have had an eye injury while boxing. He could not stop crying, and you could see he was in a lot of agonies.