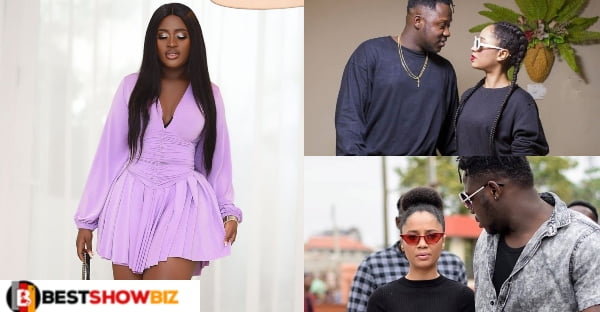 It appears Sister Derby hasn’t forgiven actress Fella Makafui for breaking off her romance with rapper Medikal, and she’s still bitter about it.

As soon as Fella Makafui came into the picture, we saw a plush wedding between the YOLO actress and rapper instead of Sister Derby despite the duo being one of the power couples back in those days.

Sister Derby, when speaking in an interview with Nkonkonsah, clarified her contentious birthday wish to rapper Medikal last year, in which she referred to the AMG rapper as her “sweet ex.”

After being asked whether she said anything bad, she repeated that she was only expressing her sentiments because she had been in a nice and happy relationship until someone (Fella Makafui) stepped in to ruin it all.

Read Also  "I don't have a son, as reports claim." -Martha Ankomah

Sister Derby explained that she wanted Fella Makafui to know that she was no longer interested in Medikal, which is why she recorded the song sweet ex.

Since Medikal and Derby had a public relationship, Derby opted to wish Medikal happy birthday, even though it was Derby who broke up with Medikal.