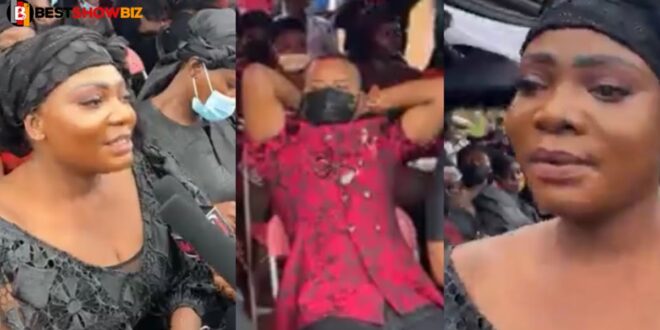 “My husband took care of all the expenses of his father’s funeral, no family member paid a dime”- Florence Obinim

Bishop Daniel Obinim’s wife, Florence Obinim, has revealed that her husband covered the entire expense of her late father-in-funeral, law’s which took place on Saturday, August 28, 2021.

She told the reporters at the late James Kwadwo Bonsu’s funeral grounds that while the family worked with Bishop Obinim to finalize the funeral preparations, no family member made any financial contribution.

“I have not seen anyone else contributing money for the funeral. My husband solely took care of everything with his own money. No family member’s monies were used, he sponsored everything but he worked together with the family. The only unique thing is that the money was only from Obinim,” she said.

She also explained why she did not do any customary ceremonies, despite Akan tradition, which requires the bereaved husband’s wife to execute some rites for her in-law following his death.

Mrs. Obinim revealed that her husband had asked her to desist, and she had honored his request.

Bishop Obinim was the last son of his father and mother, according to the singer, albeit he had several step-siblings.