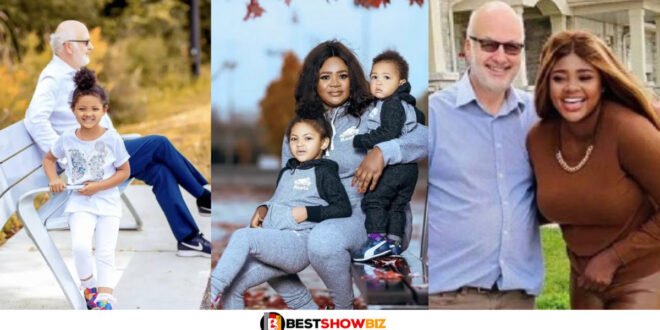 “my husband is my angel on earth”- Kafui Danku

Kafui Danku, one of Ghana’s favorite actors, has stated that she is unmoved by trolls remarking on the age difference between herself and her Canadian husband, Kojo Pitcher.

When it comes to matters of the heart, they say age is just a number, yet a segment of the public is still upset with Kafui Danku’s decision to marry the man of her dreams, who is almost 30 years her senior.

In her most recent answer to a critic who mocked her for marrying a “old man,” the actress stated that it is time for people to become accustomed to their never-ending love.

“I discovered another amusing comment under one of my adorable images. Charley, please give this elderly man some peace and quiet. It’s been 12 years of fantastic experiences with an Angel on Earth. “Get used to it,” she replied in response to a follower’s description of her as a “old man’s love.”

The Ghanaian actress and her husband, Kojo Pitcher, have two children together, named Baby Lorde and Titan.