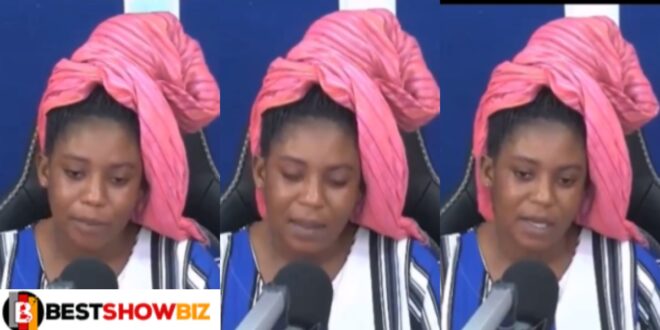 A woman identified as Akosua from Greater Accra told Oyerepa Live Show that her husband had impregnated her younger sister, who is only 14 years old.

She explained in tears on Oyerepa Afutuo, chaired by Auntie Naa, that her husband Alex has been having sex with her 14-year-old younger sister, also named Akosua.

She went to a funeral where her younger sister called her and said, “I’m 6 months pregnant for your husband, Alex.”

After a thorough interrogation, her younger sister admitted that she had been dating Alex for a long time behind the scenes. She also revealed that Alex had slept with her and had told her not to tell anyone. As a result, she managed to keep the secret.

Read Also  Obi Cubana, a billionaire, presents N1 million and a certificate of appreciation to his loyal employees.

Akosua stated that her family sat on the case and that some family members wanted them to abort the pregnancy, but her younger sister and mother insisted she give birth and make the necessary sacrifice to appease the gods for the heinous act.

On the other hand, Akosua stated on the show that she loves her husband (Alex), and thus the younger sister should abort the pregnancy.