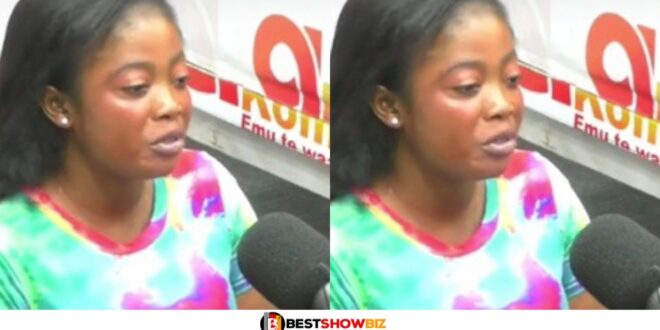 A woman named Gifty Boateng from Asuofia in the Ashanti region explains why her husband divorced her after only six months of marriage. According to the lady, she dated her husband, Foster, for several months before he proposed to her. She noticed that her husband frequently goes on business trips for weeks before returning home after their wedding.

When her husband travels, Gifty says she also pays visits to her grandmother, who is sick and unable to care for herself. But, even though it was difficult for her, the man warned her not to visit her grandmother again, and she obeyed in order to save her marriage. Foster traveled again six months after their wedding.

This time, she gets a call from her grandmother, who begs her to come visit her and cook for her. She was so moved by her grandmother’s condition that she ignored her husband’s advice and went to see her grandmother; however, her phone battery was low and she was unable to call her husband to inform him. The lady went on to say that Foster had returned from his trip while she was gone.

He attempted to call her, but her phone was turned off, and he lacked their keys, so he broke the door before entering their room. Foster and her mother drove to her parents’ house the next morning with her belongings, claiming that they wanted a divorce from her because she had spent the night elsewhere without informing them. That’s when her mother called to inform her of Foster’s intention to divorce her.

When he found out she was at her grandmother’s house, he ran up to her and begged her to forgive him for attempting to divorce her. Gifty stated that she accepted the apology and went to live with her husband while her belongings remained at her parents’ residence. What had occurred sparked a feud between her mother and the man’s parents.

Although Foster went to beg forgiveness from the elders, her mother told him that he needed to bring his parents first before she would accept the apology. Gifty stated that she waited for her husband for eight years, but he never returned with his parents to apologize. She received a call from her elders two months ago, inviting them to a meeting.

Read Also  Ghanaian lady narrates how she was nearly kidnapped after taking a taxi belonging to kidnappers.

They attempted to resolve their marital issues in order to reconcile, but she refused to agree to any of them reconciling with her husband again.The annoying part is that her grandmother forbade her from marrying again because everyone assumed Foster would return to her. Gifty claims she does not want to return to her husband, so she requests that her parents allow her to marry another man and move on with her life.