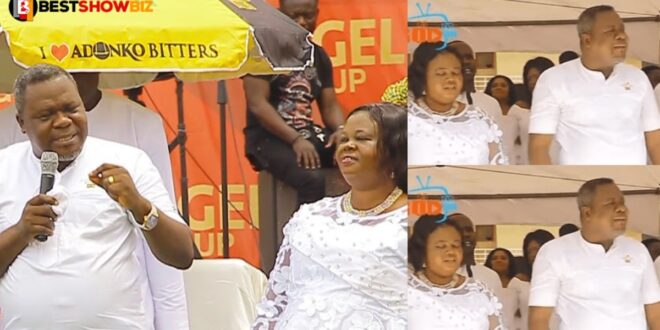 “My first wife is an angel, she is the reason I am where I am today”- Kweku Oteng

Kwaku Oteng, the founder and president of the Angel Group of Companies, has praised his first wife, whom he claims saved his firm at one point.

According to him, times were tough when he first started making Angel Cream, and he needed money to expand.

Several attempts to obtain funds for scaling were attempted, but they did not provide the greatest results, so he opted to bring in partners who wanted to take a majority stake in the firm after he had worked so hard to develop it.

In an interview with Vaultz Magazine, Kwaku Oteng stated that the offer he had was too tempting to turn down, but that his wife’s smart advice kept him from doing so because he would have lost a larger interest in his company if he had.

“In business, I’ve faced a lot of difficulties. But one of the most noteworthy of them is the time when I wanted to expand the Angel cream’s activities. I recall a certain business associate inviting me to his home to work out a transaction. He handed me GHC 3,000 and asked that I begin producing with him right now. I was tempted to take the money because I was in desperate need of cash. My wife, on the other hand, reprimanded me and advised me not to succumb to the temptation. She told us to keep doing what we were doing and that luck would shine on us at the appropriate time. In an interview with Vaultz Magazine, he remarked, “These days, when I think back on the situation, I thank God for not allowing me to make such a big mistake.”