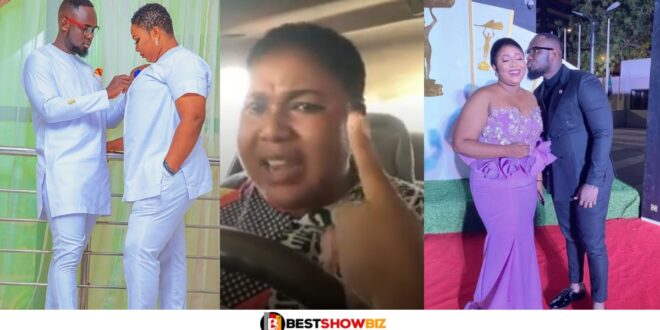 “My Ex-husband, Kaninja Is A Ḓổḡ; Don’t talk about him” – Xandy Kamel Warn Her Friend (video)

Ghanaian actress and TV personality Xandy Kamel yelled when her ex-husband’s name was mentioned and characterized him as a dog during a recent confrontation with her colleague Sly in the home of Tracey Boakye,

After Sly used the name of her estranged husband (Kaninja) in a statement, Xandy lost her temper and warned that he should never use a dog’s name in her company ever again.

Additionally, Xandy stated that she will curse everyone who mentions the name of her unfaithful ex-husband.

This all occurred in the blink of an eye when Xandy Kamel was shown in a video made enthusiastically videoing the residence of Tracey Boakye, praying that she would be able to get her hands on something similar very soon.