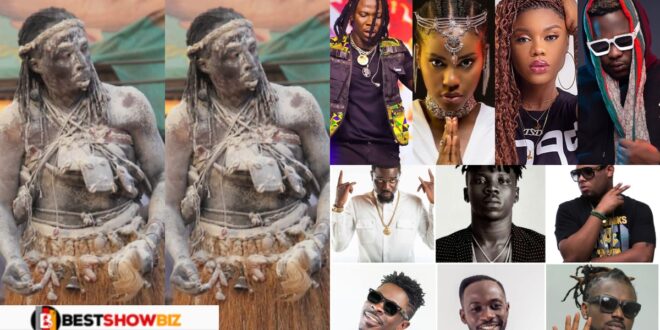 Nana Kwaku Bonsam, a well-known Ghanaian fetish priest and part-time politician, has revealed that most of our top musicians come to him for hit songs, and he has proof.

Nana Kwaku Bonsam boasted in an exclusive interview with Halifax Ansah Addo on OKAY FM that he is the mastermind behind most of the bangers our A-List musicians drop.

He nearly mentioned all of the names of the musicians who flock to his shrine to seek his assistance in releasing street bangers in the middle of the interview.

Bonsam was stopped by controversial Prophet Kumchacha, who was also a guest on the show, after he condemned such an act and argued that Nana Kwaku Bonsam’s public mention of his clients is unprofessional.

Nana Kwaku Bonsam claimed that his dwarves wrote the majority of the local top-charting songs, despite the fact that most of the artists use juju.
Furthermore, the spiritual bulldozer slammed all the musicians who consult lesser gods for a breakthrough and then abandon them after they have pierced the mainstream media with their assistance to praise God for their success.

He maintained that this is why many musicians are unable to stay in the spotlight for long and quickly fade after having just one hit song.