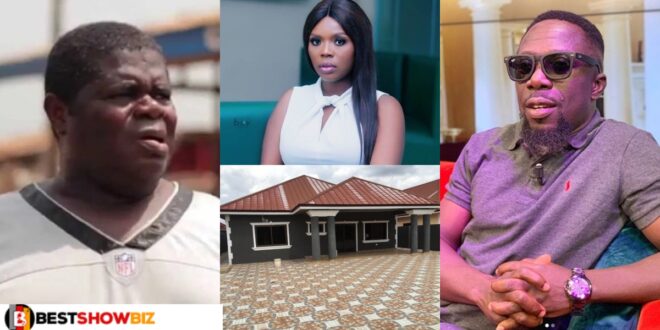 “Mr. Beautiful stopped Delay from building me a house” – TT cries out

Mr. Beautiful and veteran Ghanaian actor Psalm Adjeteyfio aka have rekindled their feud.

Mr. Beautiful accused TT of slashing the money Prophet Kofi Badu gave him to build a house not long ago, and the two actors got into an argument.

However, even though TT came out to continue to deny the scathing accusations leveled against him by Mr. Beautiful, the majority of Ghanaians were uninterested in listening to him and instead labeled him as a greedy old man.

In a recent interview with Happy FM, TT, who still has a score to settle with Mr. Beautiful, went into detail about how envious Mr. Beautiful badmouthed him to Delay.

He claims Delay promised him that she would solicit funds from her wealthy close friends in order to construct a two- or three-bedroom residence for him.

However, after Mr. Beautiful went behind his back and claimed that Badu Kobi had given him money to do the same thing, the presenter extraordinaire decided to scrap the project.

TT, who sounded unhappy throughout the interview, also revealed how Delay had secured a contract for him with VodafoneGH, but she angrily told the telecommunications giant to cancel the contract due to Mr. Beautiful’s lies.

TT did not hesitate to admit in the middle of the interview that Mr. Beautiful had been of great assistance to him in the past, so he was taken aback when he discovered that he was the one who totally destroyed him to Delay.

‘Posterity will judge Mr. Beauitful for disgracing him,’ he said at the end of the interview.