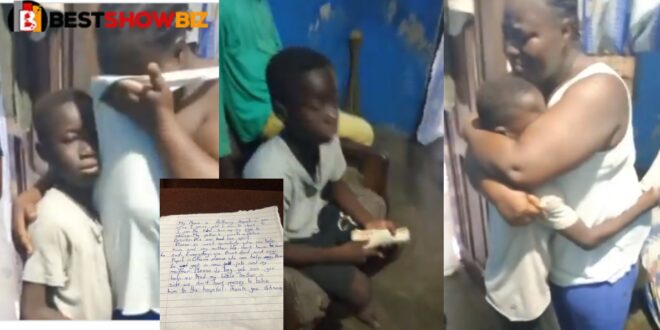 Mother cries as her son writes a letter on social media to raise Ghs 900 for her due to her poor condition.

The power of social media has been demonstrated once again as netizens on Twitter have united together to assist a young kid who wrote a letter outlining his family’s financial predicament and shared it on Twitter.

The small boy explained in his letter that he is the third of five children, with his father working as a trotro driver and his mother as a stay-at-home mother.

He said that his father had lost his work as a result of a problem with his automobile engine and that they were now unable to afford even the most basic of necessities.

As a result, he appealed to Ghanaians to come to his family’s aid in their time of tremendous need.

And he certainly wasn’t disappointed as his plea for assistance was duly heard, and netizens instantly rallied around the youngster, raising a substantial sum of GHC900 to be distributed to the 10-year-old and his family.