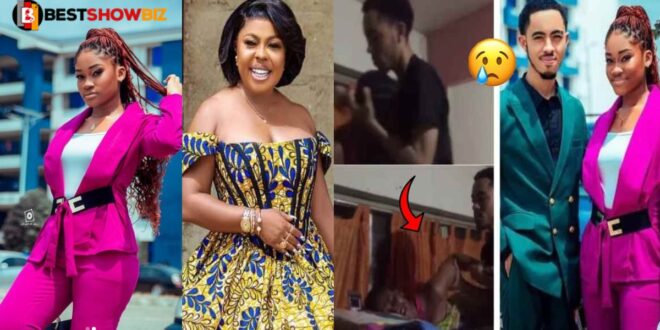 Afia Schwarzenegger has been accused of pushing one of her son’s girlfriends to terminate her pregnancy after they had episodes of s3x before she became pregnant.

Ayisha Modi, her former enemy with whom she has been feuding for the past 6 months and counting, threw this spicy filla into the media spotlight.

Ayisha Modi was driven to drop this bombshell after Afia Schwar shared her most recent photo on Instagram, in which she appeared incredibly thin and pale.

Controversial, Afia Schwarzenegger, as we reported earlier, commented the photo with a slew of nasty words, which did not sit well with Ayisha, forcing her horrific reply.

According to Ayisha Modi, the lady whose name has been revealed was three months pregnant until evil Afia Schwar pushed her to get an abortion because he hated her.

Remember when a few months back, James Ian Geiling Heerdegen, one of Afia Schwarzenegger’s twin sons, broke up with his fiancée, Naa Koshie, after their bedroom photo went viral?