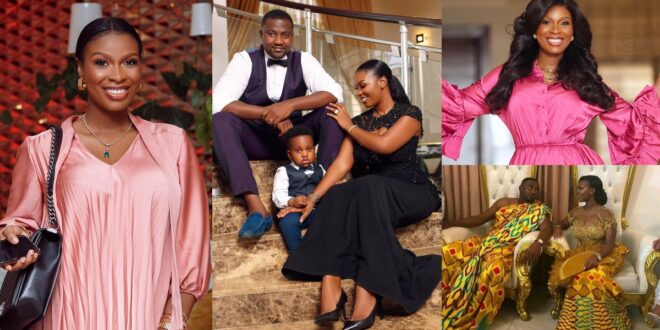 John Dumelo is a well-known Ghanaian actor who has also dabbled in politics.

The Ghallywood actor is married to Gifty Mawuenya, a beautiful lady.

On May 12, 2019, the couple was married in a beautiful wedding attended by my family and friends, celebrities, and high-profile people.

John Dumelo and his wife have a handsome son named John Dumelo Junior, who bears his father’s name.

She holds a Bachelor of Laws degree from the Ghana Institute of Management and Public Administration, as well as a Central University diploma (GIMPA).

She was a member of the 2016 graduating class, but it is unclear if she plans to practice law in the future.

Read Also  See Photos Of A Tree That Grows Fruits That Looks Like A D!ḉk

Though Gifty spends most of her time in Ghana, she considers this to be her second home because she is based in London, England. Her parents are also based in the United Kingdom.

Selassie Ibrahim, a well-known actress, is her sister.

We have gathered some stunning images of Gifty Mawuenya for you below.