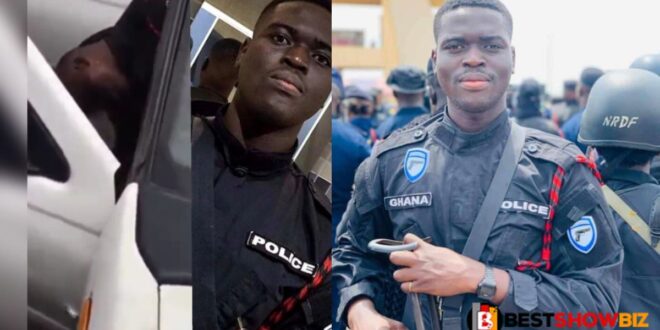 Two people were killed: a police officer and a civilian. Another person was hurt.

No.58449 G/Constable Emmanuel Osei, a murdered police officer, has been identified.

The officer who was killed was from the National SWAT Headquarters, and he was accompanying a pickup truck with the registration number GT 8592-W belonging to “MON-TRAN,” a corporation that offers cash in transit services to numerous financial institutions in Ghana.

The armed robbers were around eight (8) and rode four (4) motorcycles.

Joyce Amankwah, a 35-year-old woman who was seated in her kiosk when she was hit by a stray gunshot, died instantly.

A bystander, Eric Okyere, was also struck in the hand and sent to Korle Bu Teaching Hospital for treatment.

Before the police arrived, one Okyere was brought to the Korle Bu Teaching Hospital.

The thieves took the weapon of the dead police officer.

watch a video from the scene below;