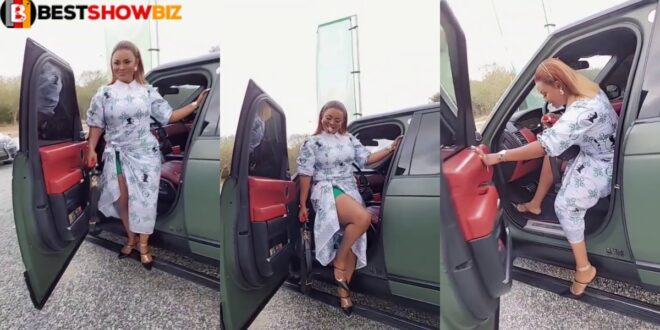 Nana Ama Mcbrown, host of United Television, steps out in a beautiful new Range Rover – The New Range Rover is green in color and appears to be a high-end vehicle – Given that she does not rent automobiles or flaunt ones that do not belong to her, it is possible that she has acquired the new ride.

Nana Ama Mcbrown and her husband have just returned from a romantic trip to Dubai, the most touted city in the United Arab Emirates, and are already making an impact in Ghana.

It appears that she traveled there not only to relax, but also to make arrangements to alter her car when she returned. She arrived in a brand new green Range Rover, which had never been seen with her before.

The Kumawood actress is one of the most well-known figures in the industry, and she is not renowned for flaunting a car that is not hers. If that is actually her newly bought Range, it will be a strong indication of her wealth.