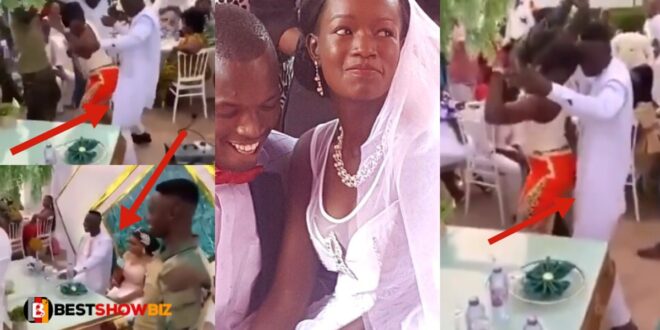 As reported earlier, a video of a man snubbing his bride to dance seductively with a female guest at his wedding reception has gone viral.

In the footage, the groom is seen swiftly getting up from alongside his wife and dragging a female guest, who was dancing, toward where they were sitting at the wedding reception.

They danced and had a good time while their friends cheered them up. The bride had been feeling nervous the entire time, and she finally got up and took the dance floor.

Well, just after her wedding, she has released a new video in which she tells Ghanaians to mind their own business.

In the footage obtained by Bestshowbiz.com, the lady is seen walking beside her husband.

She burst out laughing and exclaimed, “Mona Mobl3,” which means that those who find anything wrong with what her husband did are the ones who suffer, not her or the husband.

The lady went on to say that while the two of them are happy, whoever takes what happened at the reception seriously is the one who suffers.