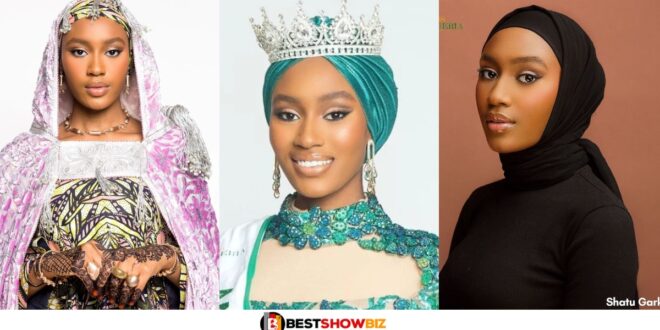 Miss Nigeria winner, who is a Muslim; goes viral after wearing ‘hijab’ before putting on the crown.

Garko, from Kano, just became the first hijab-wearing candidate to win the pageant’s prestigious crown since it launched in 1957.

Her participation in the competition, however, has elicited conflicting emotions due to her religious background as a Muslim.

The Kano State Hisbah board had labeled the beauty pageant as anti-Islamic and announced preparations to question Garko’s parents for allowing her to compete.

Hisbah’s stance on the subject was also supported by the Muslim Rights Concern (MURIC).

However, in an interview with BBC Pidgin, the 18-year-old lambasted her detractors, adding, “Nigerians adore judging others.”

The new Miss Nigeria also denied charges made by some that she paid to win the competition.

“To be honest, Nigerians like passing judgment on others. Many individuals said that the president paid for my crown, while others claimed that the state governor paid for it. “Some have suggested that my parents paid Miss Nigeria, but that is not true,” she stated.

In response to Hisbah’s assertion, Garko stated that she has yet to get an invitation but has gotten some nasty comments from others.

The hijab model, on the other hand, stated she is unconcerned about the criticism and that there is nothing she can do about the crown.

“No one has phoned me, but I’ve had so many comments and direct messages saying, ‘I was naked,’ and ‘I’m doing the wrong thing,” she continued.

Read Also  Because of Papers; Young Black man marries old white Grand lady, says she is the love of his life

“Some individuals, who aren’t even Muslims, have complained that I’m ruining the Miss Nigeria tradition.” To be honest, I don’t respond to them, I don’t say anything, and I simply walk on. There is nothing I can do because the crown is already on my head.”