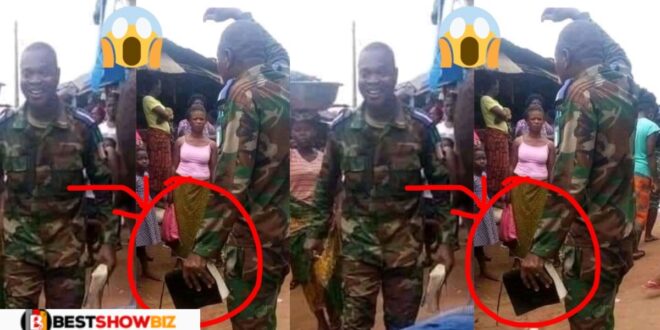 The entrance of a military officer into the street to preach the word of God has sparked a commotion among onlookers.

Things that people do on the streets of Ghana are very wonderful, and it is impossible to describe them all. The fact that people will do anything and everything to get people’s attention is no longer a surprise to anyone nowadays.

People were perplexed as to why a military guy would be preaching on the streets when his primary responsibility is to be at his station and give security to the citizens of his country, according to the media.

It was observed that the young man, who was dressed in military garb, was shouting and appealing for people to gather around him so that he might share the word of God with them. He also appealed to passersby and individuals who are otherwise preoccupied to lend him their ears as he strives to educate them on the importance of accepting Christ as their personal savior and Lord.

Many individuals who were in the vicinity were taken aback by what was going on, but they had nothing they could do to stop it. The question that was ringing in the thoughts of most people was, ‘How can a military man come out here to preach the word of God with people while he is still dressed in his military uniform?’ Could it also be that he is on the internet attempting to attract the attention of others?