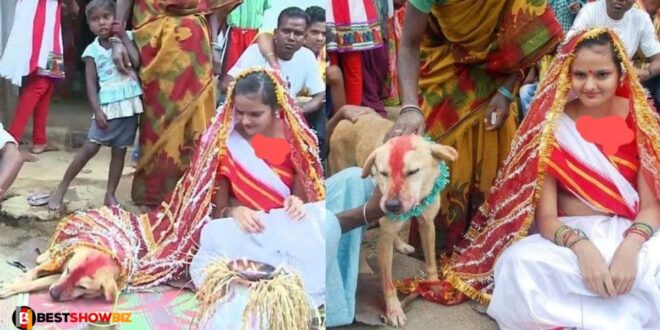 Meet this beautiful lady who happily married a dog (Photos)

The world we live in right now is evolving to the point that it is becoming increasingly impossible to comprehend how things are unfolding.

People live according to their culture, race, and tradition, yet they also do bizarre things that contradict religious precepts.

Others who do not practice the same culture may find other people’s culture strange.

Different countries and customs have different ways of getting married, and in this case, the lady in question has just done the unthinkable.

The lady at issue is known as Mangli Munda, and she is a lovely young girl from Eastern India who married a dog named Sheru owing to their strange cultural norms.

The spiritual elders of the community disclosed to her that an evil spirit had entered her body and that she must do the ceremony in order to be free of the bad spirit.

It is thought that if she marries a guy without following the rite, her spouse will suffer from bad luck and die.

The wedding of Mangli and the dog was attended by elders and well-wishers from the neighborhood. After being driven in a wedding car, the dog was given a special treat.

Mangli’s parents believed that performing the cleansing rite would rid their daughter of all the bad luck and evil spirits that had been following her around, and it was her father who brought the dog for her to marry.

According to the community’s elders, this is a regular ceremony conducted for young females before they are allowed to marry any man of their choice.