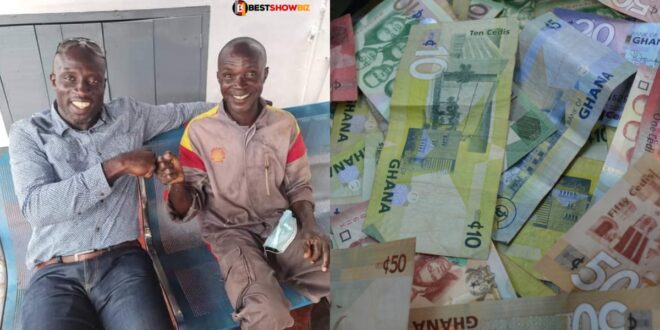 Meet the washing bay Attendant who found millions of cedis and returned it.

You may rest confident that there are still honest guys out there, despite the current economic difficulties.

Meet Mr. Obeng, also known as Agyabeng, a man in his fifties who works as a washing bay attendant at KMA Shell. Many people were astonished when he returned a large sum of money he found in the Kejetia market.

During an interview with our reporter, he described stumbling on an odd polythene bag on his way to work at Adum at the “trotro” station.

He decided to open it to see what was inside, and to his astonishment, it was money, a large sum to be exact. I was perplexed at the time and chose to return it to Kessben Media. Surprising! Is not that so?

Yes, because you can imagine how much money a laundry bay attendant makes in a day. And you can guarantee that this is something that the majority of people struggle with.

We congratulate you and God bless you for showing excellent morals, and we celebrate you for being the wonderful guy that you are as a Christian and a member of St. Catholic Church in Sepe Tempom, a suburb of Kumasi.

If you know of someone who has misplaced money in Kumasi’s central business district, please call the Kessben media front desk for identification and collection.