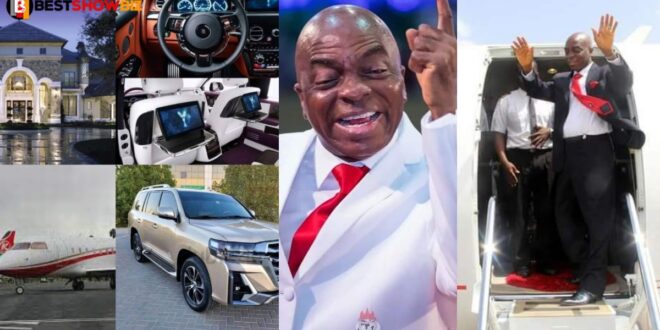 Meet the richest pastor in the world, who has 4 private jets and numerous cars

While the Bible clearly declares that redemption is free, it does occasionally come at a cost. The Church requires its members to support their pastor by paying tithes, offerings, and gifts. However, many pastors have amassed enormous riches, prompting widespread anxiety.

Born to a Muslim father and a Christian mother, David Oyedepo is a Nigerian pastor, novelist, businessman, and philanthropist. He followed in the footsteps of his mother, who was a member of the immortal order of seraphim and cherubim.

On September 27, 1954, in Osogbo, Osun State, David Oyedepo, the founder of David Oyedepo Ministries International, which founded the Living Faith Church Worldwide and other organizations, was born.

Ibrahim and Dorcas Oyedepo were his parents. At the age of 15, he dedicated his life to Christ and began preaching with the help of Betty Lasher, his secondary school mistress.

He went on to study architecture at Kwara State Polytechnic, Ilorin, before moving to the United States and earning a PhD certificate in human development from the University of Honolulu, Hawaii.
With a net worth of $150 million, the preacher man is one of the wealthiest pastors on the planet.

According to Forbes, owing of the several businesses he has founded, his fortunes have surpassed Bishop T.D.

He owns private planes, houses, and hundreds of cars.

He has a fleet of four luxury jets, including a $30 million Gulf Stream V, as well as hundreds of automobiles in his fleet. This also includes church members who anonymously contribute vehicles to the church without anyone’s awareness.