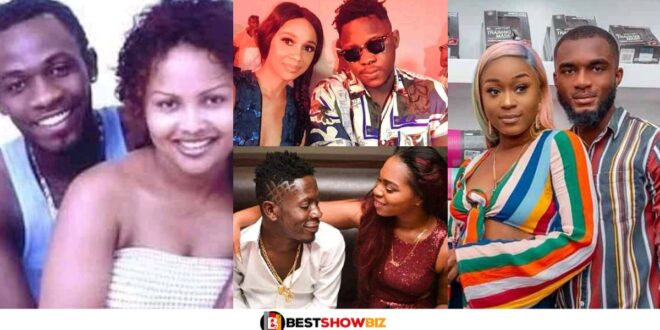 Do you also agree that everybody has an ‘ex’ on this planet?

Well having an ex is not a bad thing though as some break-ups open doors for great things in our lives sometimes.

Bestshowbiz.com has compiled a list of the ex-boyfriends of some popular celebrities who made their relationship public but hit the rocks at the end.

Shatta Michy is a social media influencer from Ghana.

She also serves as a brand spokesperson. Shatta Michy is Shatta Wale’s ex-girlfriend.

Shatta Wale is a Grammy-nominated Ghanaian musician. Shatta Majesty is their only child.

Efia Odo is a Ghanaian actress who also works as a brand spokesperson.

She is a social media influencer as well.

Efia Odo has been in a number of films. A photo of Efia Odo and her ex-boyfriend is seen below.

Nana Ama McBrown is a well-known Ghanaian actress as well as a media personality.

Her Instagram feed has a large number of followers. Nana Ama McBrown has been in several Kumawood films.

Sister Derby is a musician from Ghana. Medikal, a prominent Ghanaian rapper, is Sister Derby’s ex-boyfriend. Sister Derby and Medikal are shown below.