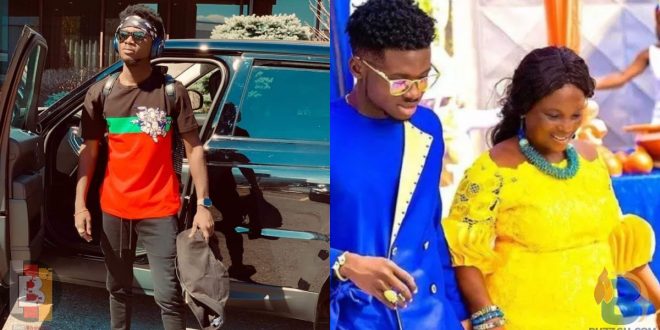 The popular Ghanaian artiste  Kuami Eugene born Eugene Kwame Marfo has finally given his fans a Glance of his mother as he shares a photo of them together.

Mrs. Juliana Marfo is the biological mother of Kuami Eugene who was married to Mr. Alex Marfo in Oda where they gave birth to the rock star.

In the early lives of kuami Eugene, he left the school because he loved music, and studied music for more than two months in a studio located in the East without informing the school authority and his mother. He was kicked out of school after it was discovered he had skipped school.

Finally, his love for music turned into an asset for him when he happened to find himself in the reality competition show Season 5 of the MTN Hitmaker in Ghana in 2016, where he finished third overall.

He soon signed with Lynx Entertainment and released a number of singles. In 2017, “Angela reached over a million views on YouTube, more than any musician on the label, which marked the first of Ghana’s top 10 songs to rotate. Check out more about Eugene here

Sometimes the saying that: ‘behind every successful man there is a woman’ it literally means the mother as it is based on the struggle of Kuami Eugene’s mother that has given rise to the rock star in him.