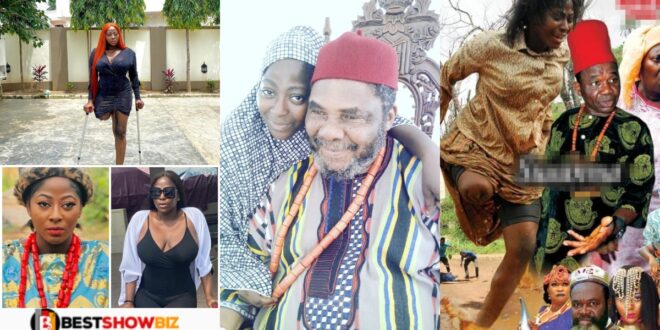 Doris Akonanya had always wanted to be an actress since she was a youngster, but after losing one of her legs in an accident, she feared her dream would never come true.

She was depressed following the accident until she saw Pastor Nick Vujicic’s videos and was inspired by his success story.

She reasoned that if Pastor Nick could succeed without legs or hands, she could too.

Doris stated she was scared when her leg was removed and had to ask her mother where her limb was.

Her mother said the white people took the limb away to cure it and promised to return it when they were finished.

Doris somehow trusted her mother and hoped that her limb would be restored to her someday, despite the fact that she was still a small child at the time.

So she asked one of the hospital nurses when her limb would be returned one day, and the nurse told her the truth. That was a particularly sad moment for her.

She was concerned that no one would give her a chance in the film industry, but she knew she had to go for it anyhow.

Doris is a Theatre Arts graduate who stated that it was not for her at the time.

Doris claimed in an interview with BBC News Pidgin that she used to be afraid of guys approaching her on one leg, but that her attitude has changed now that men are the ones “rushing” her.

She stated that she would never allow a man to look down on her due to her physical limitations.

She went on to say that anytime people see her dance videos on Instagram, they constantly want to know what motivates her.

She stated that she strives to be joyful all of the time because she does not want depression to consume her.

Doris has been in a number of films and has shared the screen with a number of notable Nollywood actors, like Pete Edochie, Chiwetalu Agu, and Ngozi Nwosu, to name a few.

below are her beautiful photos;