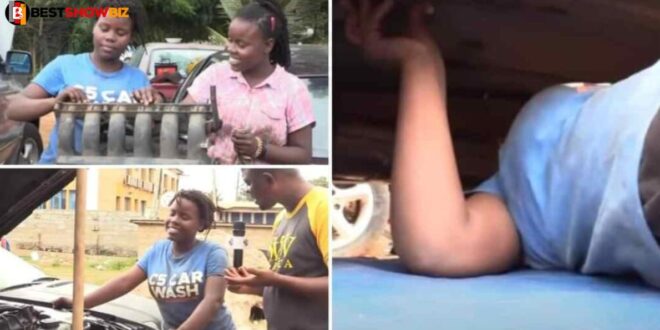 Meet the 14 years old twin girls who dropped out of school to become mechanics, they claim they were born to do this.

Gloria and Glorine Martels are two sisters who dropped out of school a year ago to pursue a career as a mechanic. The 14-year-old twins claim they were born for the job.

After learning at the BMW shop, Gloria and Glorine Martels, both 14, chose to drop out of school and focus only on mechanical skills.

Although they want to return to school to polish their trade at a technical institution, the twin sisters think they were born for this since it runs in their blood.

Gloria stated in an interview with DJ Nyaami on SVTV Africa that their passion for the job led them to it and that their parents were supportive because their father worked in the field.

Instead of attending school, the younger siblings started a business over the school holidays and now earn N14 million per month.

“Both my father and uncle used to work in this industry. They wanted us to finish school first, but we were running from school to work here. They decided to let us learn eventually, “Grace told DJ Nyaami.

Glorine, on the other hand, revealed that their ambition is to one day become Army Wheeled Vehicle Mechanics.

“In the future, we want to be soldiers. After five years of on-the-job training, we will return to technical school. “Right now, we primarily work on BMWs,” Glorine explained.

When speaking with their master, Iddrisu Baah, he admitted that he had reservations about their work ethics when they initially began, but that he had been proven incorrect.

“They are both hardworking and intelligent. They can disassemble and reassemble the vehicle, as well as remove the engine. “However, they are now learning how to detect faults in automobiles, “he explained.