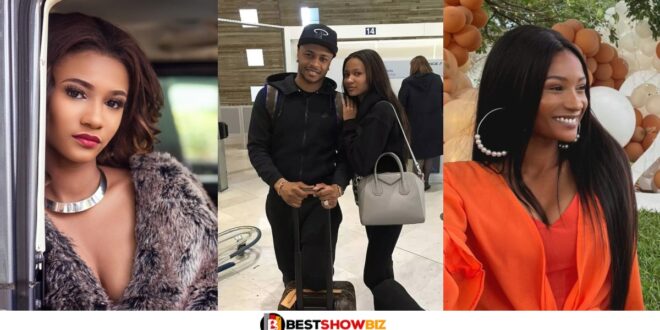 Meet Imani Ayew, The Beautiful Only Daughter Of Abedi Pele (Photos and Video)

Abedi Pele and his wife Maha married on August 9, 1987. The couple married in France, where the former Black Stars captain played for Olympique de Marseille in the French League.

The couple had three children together, two sons and a daughter. He also has a son from a previous relationship. The children of Abedi Pele are all trend setters in their own right.

Ibrahim, Andre Dede, and Jordan, like their father, are footballers, while his daughter is a model, a career outside the family niche. Fans are not surprised that she is making great moves in her industry, given her stunning looks and gorgeous personality.

It’s no surprise that Pele’s daughter chose to be a fashion model after seeing pictures of her. With perfect looks, most likely due to her parents’ great genes, she has taken the fashion world by storm and begun to make a name for herself apart from her family’s influence.

Imani Ayew was born on June 6, 1998. Her mother, Maha, had her third child, and her father had his fourth.

Is Abedi Pele’s wife from Ghana? Her mother, on the other hand, is of Lebanese descent and quite the beauty herself. Many of her fans attribute her good looks to her beautiful mother.

Pele’s only daughter revealed her boyfriend, Neil Hardcastle, on her Instagram page in 2017, shocking many of her followers. She posted a photo of the two of them, along with the caption:

When GOD says Yes! Forever grateful for this amazing soul.

His fans believe he is Lebanese-Ghanaian. He lives in Barcelona and attends school in Newcastle, England. She also posted a photo of them at the beach on his birthday with a lovely caption. It said:

Happy birthday to the realest! Many great things ahead, baby! May God continue to bless you! Love you always, My G.

Imani Ayew is the only daughter and last child of Ghanaian football legend Abedi Pele. She is a fashion model, as opposed to her football-playing siblings. Despite being famous and having a famous father, she has managed to keep her life low-key.