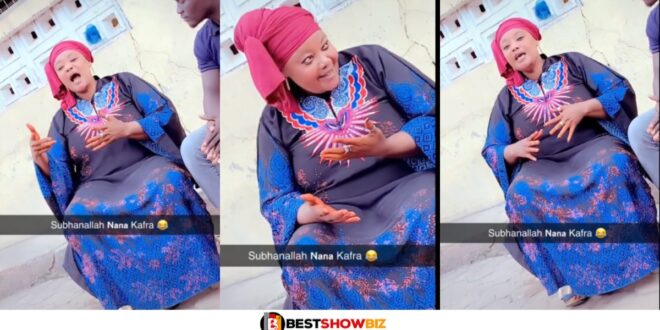 The digital environment that is indigenous to Ghana has captured a number of interesting photographs and videos, which users have frequently and occasionally used as memes to express humorous thoughts with one another.

One of these movies captured the moment an unidentified Ghanaian Muslim woman was overheard in a video exclaiming “Subhanallah Sanu Nana Kafra” after a guy was thrown off a tricycle by a cow that was being tamed. This video went on to become one of the most famous videos ever.

While you were browsing the internet, you may have come across the original video or perhaps heard the voice over another video at some point, but we are willing to bet that you are not familiar with the woman who is responsible for that voice.

The woman known as Hajia Fuuta has been located, and for the very first time, she has related the events that led to the meteoric rise to fame she experienced.

During a recent interview, she recalled that her family had purchased a cow to be slaughtered during the Islam festivities some four years ago, but the animal was so powerful that it kicked one of its handlers named Nana who was taking it to the slaughterhouse.

Read Also  "When did you start doing music to be this rude and disrespectful"- Victoria Lebene fires Mr. Drew