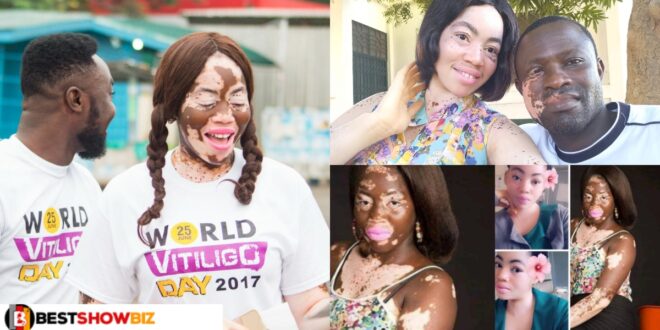 Because of a skin condition known as vitiligo, Enam Honya Heikeens, a beautiful registered nurse by profession, has had to endure a difficult time throughout her life, which she describes as “hell on earth.”

She was diagnosed with the disease when she was seven years old, and she has had to deal with people staring at her strangely ever since, as well as stigmatization.

However, she has not allowed her condition to hold her back in life, and as the director of the Vitiligo Ghana Foundation, she is assisting others who suffer from the same condition in their efforts to combat stigmatization.

She explained how difficult the journey had been, saying,

“People are constantly inquiring about my skin. They always stare at me, and some members of the community refuse to ride the same bus with you or allow their children to befriend you because they believe the disease is contagious. “

After attending Keta Nursing and Midwifery School, Enam became a nurse. This was after she had completed her elementary and secondary school education in Keta.

Vitiligo is not contagious, despite being an incurable disease. Enam’s motivation, she says, is to continue inspiring and assisting others who are stigmatized because of their vitiligo.