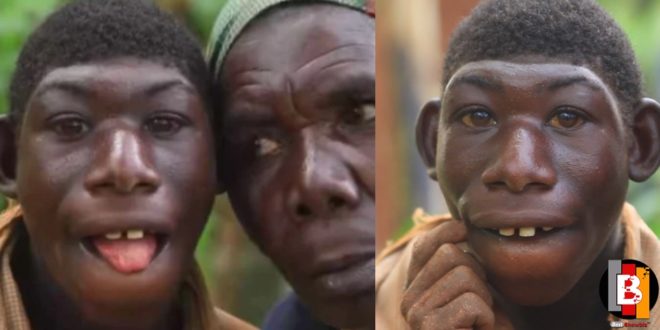 A special boy in a village in Rwanda named Zanzimana Ellie was born with a rare defect which has got his facial appearance closely taking after an African Chimpanzee and it has got many always bullying him.

The boy who is now 21 years old was born a mystery and is leaving a mysterious life. His mother says he is a gift from God after she and her husband lost five(5) of their children [at delivery] years prior.

According to the boy’s mother, She and her husband went on their knees in prayer for a child who would come for a stay and not die as the others did. They told God they would readily embrace any child “even if it is abnormal” and she believes their prayer has been answered with Ellie.

When she gave birth to Ellie after 9 months, he was very tiny with a tinier head as if she had delivered prematurely – Doctors told her she would be facing more problems raising such a boy but that was a risk she and her husband were willing to take so far as their 6th child doesn’t die like the others.

However, as Ellie grew, the problems the doctors anticipated begun unfolding as the condition goes beyond his physical appearance. The boy has an abnormal brain that is unable to process a lot of things like speaking, though he understands when u speak to him.

This also has a great effect on his behavioral characteristics as he behaves more like an animal [an ape]. The boy’s mother revealed that he is unable to eat normal food but always feeds him bananas and a variety of fresh fruits – and sometimes fresh grass.

These challenges together with the fact that Ellie is fond of the Jungle and people have to chase him to bring him home every evening, a lot of people bullied him and calls him a monkey. His poor mom always whimpers whenever the boy is bullied by his colleagues and sometimes even adults.