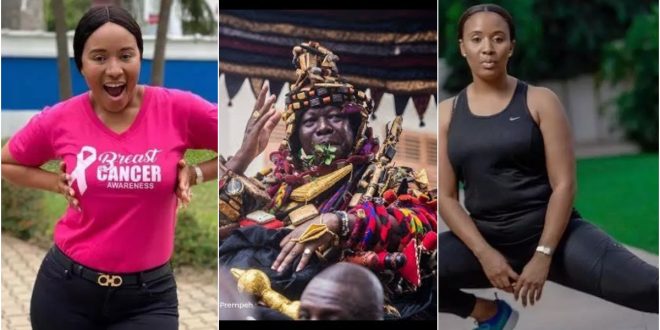 Dr. Caryn Agyeman Prempeh is the daughter of the Otumfour Osei Tutu II, the King of the Asante Kingdom, and a medical practitioner with a major interest in Global Public Health.

She was named  after her father’s late mother Ohemaa Afia Kobi who was the queen mother of Asante Kingdom.

after school, She practiced medicine with experience working at the following hospitals: 37 Military Hospital, Komfo Anokye Teaching Hospital, and Abenkyiman Hospital. She is currently at Clarion Health International – Accra as the Resident Medical Officer.

Read Also  Tracey Boakye Lied; The East Legon House And Restaurant Belong To A Married Man With Kids In The UK

She currently hosts ‘the late afternoon program’ on GHONE TV, a show previously hosted by Bela Mundi. Aside from her profession as a Tv Personality and a Medical officer, she is also the founder of a non-profit organization called CERVIVA focused on creating awareness and educating women on Cervical Cancer.

check out more of her pictures below: