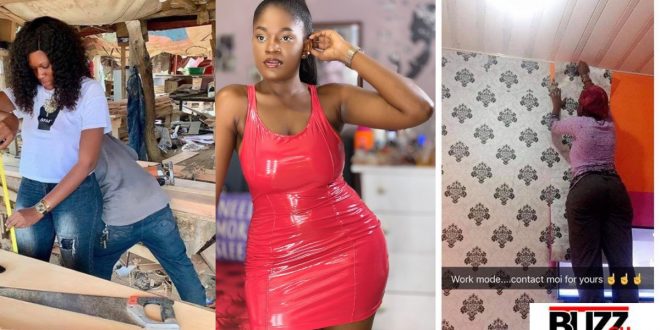 according to Ama in a QnA with Edward Asare, she wanted to be a lawyer but ended up being a carpenter after she completed SHS.

in her own words, Ama Endorsed disclosed;

“I didn’t train to be a carpenter. My Dad was one and because I was Daddy’s girl I learned it from him. I was always with him whilst he was working. As I grew up, I started making penny boxes and fixing broken tables, chairs and petty damages at home with him was never something I wanted to do from childhood I had always wanted to study law. My Dad’s dying words to me affected me positively. He said I will never be successful in any career aside from carpentry. I laughed and asked why. He said I was born to lead the feminine generation into creativity. I didn’t take his words seriously in the beginning. I tried modeling & acting after SHS but I was not earning as much as expected. I had to take care of my family as my first child. I tried working with some TV stations as a presenter but didn’t work out. That was when I remembered my Dad’s words all over again and accepted the challenge. Now here we are. Bought a car from carpentry”

Ama Endorsed only schooled up to High School (Aburi Presbyterian Sec Tech) but now owns her own furniture shop now under the name NAMAS DECOR GH.