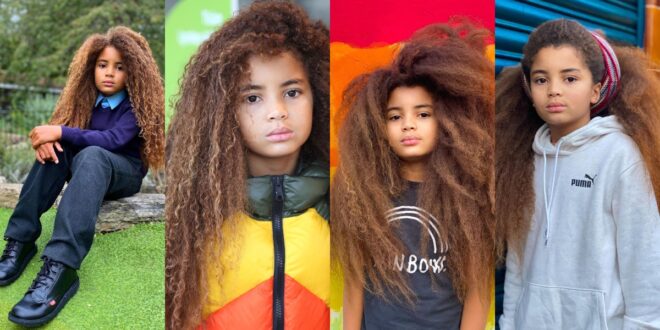 Meet 8 years old Ghanaian boy with the longest hair in the world. (photos)

Farouk James, an 8-year-old model from London with Ghanaian origins, has become a social media sensation, especially on Instagram, thanks to his long, curly hair.

The boy model has been utilizing his newfound social media clout to encourage women to accept their natural hair.

Though his hair has been a blessing since he was signed at the age of six months, he recently made headlines after it was revealed that his mum, Bonnie Miller, was refused admission to two UK schools because of her son’s long natural hair.

James’ father is Ghanaian, and his hair was left to grow before he turned three years old for cultural purposes, although this seems to have been a disappointment when he was refused entry to two UK colleges.

One of such schools, according to bestshowbiz.com, is The London Oratory Academy, where James’ 23-year-old brother attended.

Because of the stereotyping James was facing, his mother was forced to cut his hair short while his hair became longer and longer.

Bonnie, on the other hand, defied the odds, and Farouk is now a sought-after icon.