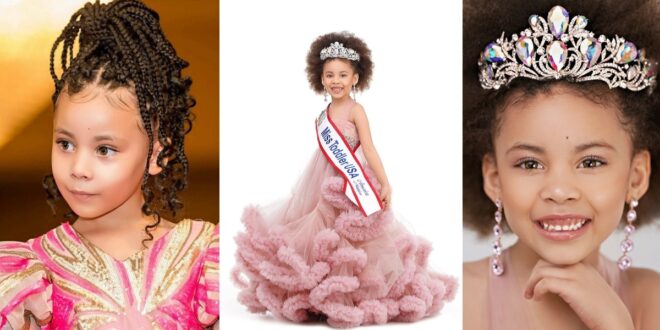 A beautiful 5-year-old Nigerian girl has made headlines since being named the new Miss Toddler USA America Nation 2021.

Kleopatra Vargas, a 5-year-old Mexican-Nigerian-American from Chicago, Illinois, won the title of Miss America Nation, a popular children’s pageant in the United States.

Princess Kleopatra, who speaks Igbo, Spanish, and English fluently, expressed her gratitude to the organizers of the pageant contest to journalists after she was named the new Miss Toddler USA America Nation 2021. She also expressed gratitude to her parents for their affection, advice, and encouragement.

Princess Kleopatra, who earned her first pageant crown at the age of ten months, said she was 10 months old when she won Baby Illinois 2016 after defeating 20 other children.

Her proud mother also talked about her daughter’s victory, identifying her as an exceptional child with many rare talents. Princess Kleopatra Vargas will be expected to do more now that she has been named Miss Toddler USA America Nation 2021, according to her.

After scoring best in her Evening gown parade, described as beauty with 25%, a cultural parade with 25%, and community service across the person forum with 50%, the 5-year-old was crowned Miss Toddler USA America Nation 2021, ahead of other Kids who participated in the Contest.

below are more of her beautiful photos;