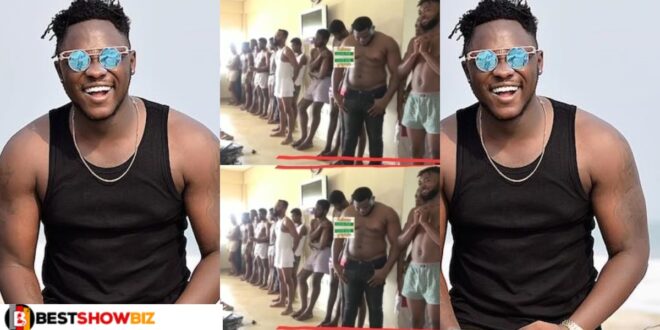 AMG Medikal is trending on social media after the arrest of 26 internet fraudsters and scammers yesterday.

Yesterday, word spread that 26 alleged internet fraudsters, 24 men and two women, had been caught in Kasoa.

According to the police, the suspects will be interrogated and brought before the court in due course.

The police then warned the public to remain watchful and to report any members of the community whose conduct or activities are questionable.

Following that, a blogger known as those called celebs warned her followers to avoid fraud.

Such people, she claims, are always jailed. The Ghanaian blogger residing in Germany used Nigerian Instagram celebrity Hushpuppi, who was detained by the FBI, to warn her readers that those engaging in fraudulent operations face prison time.

Surprisingly, her admirers have also warned musician Medikal to be careful or he may wind up in jail one day.

There have always been rumors that the musician is a fraudster because no one can pin down the source of his income when he rose to stardom a few years ago.

Medikal’s name may have surfaced again as a result of the show-off he and his wife Fella Makafui performed yesterday.

The couple has erected a multi-million dollar structure specifically for their daughter, and they nearly shut down the internet yesterday with videos from their new home.

It’s funny that Medikal’s name appears regularly in situations like these, but whatever the case is, we hope he gets it sorted out!

Check out the posts listed below;